The Adirondack Mountains are home to a vast array of wildlife, from tiny chipmunks and moles to massive moose, cougars, and black bears. Birds, fish, reptiles, amphibians, mammals, and insects abound in the Adirondacks, making the region an ideal location for outdoor enthusiasts of all passions and pursuits.

The Adirondack Park’s 6.1 million protected acres include more than 10,000 lakes, thousands of miles of rivers and streams, and a wide variety of habitats, including alpine zones, wetlands, and old-growth forests. Leaving you with an endless number of locations to explore. The animals you encounter will vary according to the place and time of year, but some of the creatures you may find include: 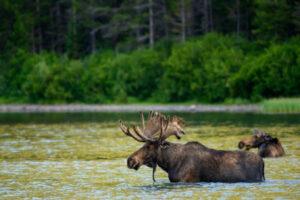 These majestic and iconic animals, which can stand more than six feet tall and weigh more than a half-ton, are the largest land mammals in New York State. They are slowly repopulating the region after overhunting and deforestation decimated their numbers over the last two centuries. Luckily, it is now a misdemeanor to kill a moose in New York. They are most active at dusk and dawn, and moose sightings most often occur in the fall, during the mating season.

Though they are another rare sight, bald eagles do exist in the Adirondacks and have made a resurgence since the 1970s. They are a protected species on New York State “threatened” list and continue to multiply in numbers each year. These incredible birds, which can live 20 to 25 years, are sea denizens that primarily prey upon fish, small waterfowl, and other water-centric wildlife. Popular local areas to observe them include Schroon Lake, Lake George, and Ausable Point in Peru, NY. 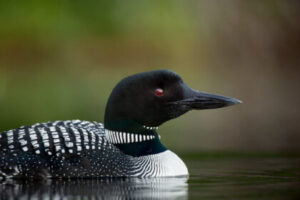 One of the most readily recognized waterfowl breeds that inhabit the Adirondacks are loons, known as the “spirit of Northern Waters.” Loons breed in the region and winter in open lakes and along the coast. Its distinctive call has become an inseparable aspect of the Adirondacks’ charm. Their eerie calls can be most frequently heard at night throughout the summer months, near where nesting occurs, or in wintering areas in the late winter/early spring.

A common Adirondack denizen—and frequent prize of hunters—is the whitetail deer, recognized by the characteristic white underside of its tail, which it raises when alarmed to warn a predator that it has been detected. They are often found on the edges of forests and in open areas by roadways, farm fields, or waterways, and can usually be spotted year-round in the early morning or early evening. They’re incredibly agile, able to swim, run up to 35 to 40 miles per hour, and jump over an eight-foot fence.

You’re more likely to come across a black bear in the Adirondacks than anywhere else in New York State, as an estimated 50% to 60% of the state’s 6,000 to 8,000 black bears live in the Adirondacks. They’re massive animals, with adult males averaging 300 pounds and females averaging 170 pounds. They hibernate during the winter but can be found other times in areas increasingly close to human populations. Relatively intelligent, many have learned to seek out human food, and may be found rummaging through trash cans, bird feeders, and hen houses in areas where homes meet the forest.

Roughly the size of house cats, striped skunks are a very common Adirondack creature immediately recognized by their black fur and bright V-shaped white stripe, as well as the pungent defensive spray they emit when threatened. They inhabit open areas like pastures and fields but are also fond of shady residential areas with plush lawns. Skunks are nocturnal and hunt in the evening for nuts, grasses, berries, insects, grubs, worms, rabbits, and other small animals, and are quite fearless, so it’s best to avoid them or risk being sprayed. 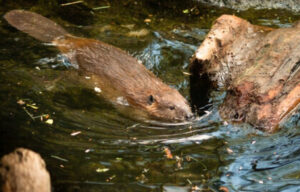 These hunting birds are famous for their unbelievable speed, reaching up to 180 mph when chasing prey. After dying off in the 20th century due to the pesticide DDT, a ban on the substance in 1971 spurred a slow regrowth of populations in the Adirondacks. As of 2022, there were 41 confirmed nests in the Adirondack Mountains, along Lake Champlain, and in the Lake George area.

Smaller than wolves but similar in terms of their dog-like appearance, coyotes average between four and five feet in length and between 35 and 45 pounds in weight. These pack animals have steadily grown in number in the area since the 1930s, generally preferring to remain in wooded areas. They don’t usually become aggressive with humans but have been known to make meals of small pets left outside unprotected.

Also known as the fisher cat, fishers are medium-sized members of the weasel family. Males average a length of 35 to 47 inches, weighing seven to 13 pounds, while females average 30 to 37 inches, weighing only three to seven pounds. Their most recognizable features include a broad head, narrow muzzle, and long, bushy tail. They are predators with sharp, retractable claws, and are skilled hunters, notorious for their ability to hunt porcupines. They mainly prey on smaller creatures like rabbits, squirrels, mice, and birds, but are omnivores willing to also eat beechnuts, acorns, apples, and berries. Fishers have a reputation for being dangerous, but that is far from the truth. A fisher won’t attack a human or pet unless cornered or provoked!

Ready to hear the call of the wild from your own back porch?

Our Adirondack land for sale is perfect for those looking for a back-to-nature experience. Enjoy the sights and sounds of your favorite Adirondack critters year round! Whether you’re looking to listen to loons from your summer porch, try a spot of winter birding, or are an avid hunter, we’ve got the perfect property to fit your needs. Contact us today to get started!