Nothing compares to the colorful foliage that the trees in the Adirondacks show off every fall. A big part of this beautiful natural landscape is the fact there are about 100 native species of trees in the region. But the trees you’ll see surrounding your home here in the mountains depend primarily on elevation.

Keep in mind that conditions ranging from soil quality to drainage can also impact the types of trees found in a particular area. It’s also common for different species of trees to grow in transition zones at slightly higher or lower elevations.

Let’s break down some of the types of trees you will encounter from the high peaks down to the lowlands. 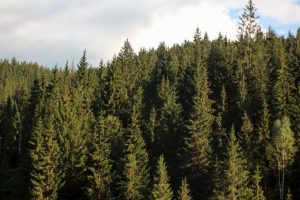 This area only makes up about 85 acres of the Adirondack’s 11 highest peaks. It’s a non-forest area where only lichens and mosses are seen.

These are trees you’ll probably only see up close if you’re hiking. This type of forest is found at elevations above 2,800 to 3,000 feet and is made up of mostly conifers. In the lower section, red spruce and balsam fir are common. Paper birch, yellow birch, and American mountain ash are found along with the spruce and fir at the lower elevations.

Here you’ll find red spruce and eastern hemlock, together with sugar maple, yellow birch, and American beech. Scattered white pines are also common. This is a transition type of forest at between 2,500 and 2,800 feet so northern hardwoods are also present.

The northern hardwood forest is the most common in the Adirondack region. It’s found at up to 2,500 feet and makes up more than 50 percent of forested land. Sugar maple, American beech, and yellow birch are the main tree types. Smaller amounts of red spruce, white pine, white ash, eastern hemlock, black cherry, and red maple are common here as well.

These areas are home to balsam fir and red spruce. Scattered white pine and paper birch are frequently found here. These species of trees like low ridges and knolls surround lakes, streams, swamps, and bogs.

Here’s a short list of the most common trees you’re likely to see in the mountains. If you’re a serious botanist, you can also be on the lookout for everything from pignut hickory to the 13 different types of hawthorn trees.

Find Your Dream Land Nestled in the Trees

Mike Black knows the difference between a white pine and a scotch pine. He can also find the perfect Adirondack property to fit your lifestyle and enhance your enjoyment of this beautiful region. Contact us today so we can start a conversation about making the mountains your home.