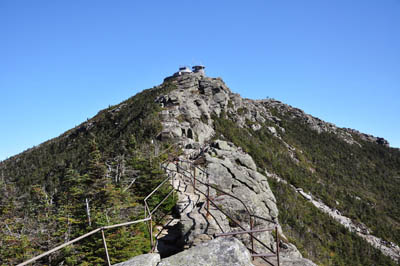 Whiteface Mountain at 4,867’ in elevation is New York’s fifth-highest peak, and bigger sister peak to adjacent Esther Mountain. Named for it’s signature snowy peaks ten months out of the year, Whiteface is perhaps most famous for hosting the alpine skiing competitions of the 1980 Winter Olympics. Whiteface’s east slope is home to the Whiteface Ski Center, still just as popular today for amateur and professional skiers alike. Just 10 miles north of Lake Placid, Whiteface Mountain is a popular day trip destination for upstate tourists.

Unique to the rest of the Adirondack High Peaks, Whiteface’s summit is completely accessible by car—how easy is that?! Take a drive on Whiteface Veteran’s Memorial Highway, opened by President Franklin D. Roosevelt in 1936, to lead you directly to the developed summit. Once you’re there, savor the gourmet rustic cuisine at the peak’s Castle Cafe restaurant, pick up a souvenir from the gift shop, or take an elevator ride deep inside the mountain to the mountain’s highest point and take in the expansive 360-degree view of the neighboring Adirondack mountains (and even as far as Vermont and Montreal on a clear day)!

Just a short drive from your Adirondack property, there’s no other Adirondack High Peak quite like Whiteface Mt. With its easily accessible breathtaking views and summit activities, you’ll be satisfied visit after visit.