With more than 3,000 freshwater lakes, ponds, brooks, and streams, the Adirondacks are a favorite among avid fishermen. The region is home to 80 species of fish, including bass, trout, walleye, pike, perch, and salmon. From ice fishing and fly fishing to reeling in the big one on your boat, the Adirondacks offer sportsmen an abundance of year-round opportunities to cast a line.

For some of the best fishing on the East Coast, check out these prime Adirondack fishing spots: 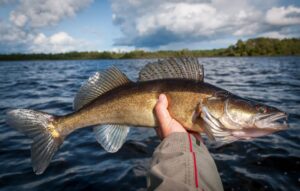 From 1940-1979, Great Sacandaga Lake held the world record for the largest northern pike, and the species can still be found there today. The lake is also a popular fishing spot for bass, bullhead, yellow perch, and New York’s most valued sportfish the walleye.

At just over 30 miles long and an average depth of 70 feet, Lake George is home to some of the best-landlocked salmon and lake trout in the Northeast. You’ll also find bass, perch, chain pickerel, and northern pike.

Although Long Lake is home to bullheads, bass, and yellow perch, its real draw is the northern pike. Anglers are eager to catch one of the rare 15-pound fish that inhabit the lake but are more likely to pull out a pike averaging 22-28 inches.

The third-largest lake in New York State, Lake Champlain consistently rates among the top fishing spots in the nation. A popular destination for lake trout and landlocked salmon, the lake also hosts a number of bass fishing tournaments every year. 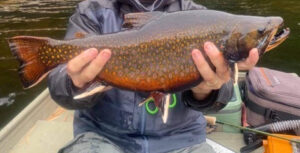 Located in the northern reaches of the Adirondack Wilderness area, Twin Ponds Preserve is a hidden gem that includes a pristine 500-acre lake, nearly 7 miles of shoreline, and world-class brook trout fishing.

Located at the southern tip of the Adirondack Park, the Sacandaga River is one of the area’s most fertile trout hatcheries. Heavily stocked with brown trout in the section between Wells and Speculator NY, the river’s west branch is a favorite among brook and brown trout anglers.

An angler’s paradise, Ausable River is one of the best trout rivers in the Northeast and features both brown and rainbow trout species. Located in the Whiteface Region, the river hosts the annual Ausable Two-Fly Challenge in the village of Wilmington NY.

The biggest lake trout in New York State was caught at Racquette Lake in 2009, and the promise of a prize-winning catch continues to draw fishermen to the lake today. While both lake and brook trout can be found in the river’s northern end, small and largemouth bass dominate the southern portion.

Looking for Fishing Land for Sale?

Adirondack Mountain Land offers NY lakefront properties for sale that would put an avid fisherman in the midst of this fishing paradise. Whether you’re looking to live here year-round, or are interested in a fishing cabin for seasonal adventures, we have the land options for you. We encourage you to browse waterfront properties and contact us for more information!